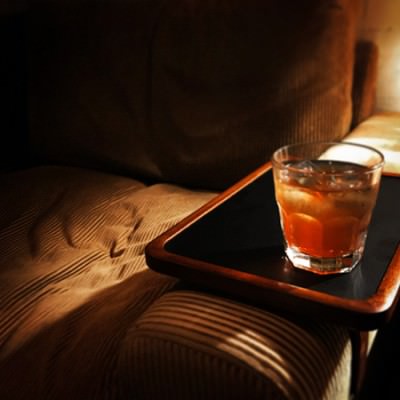 With a glass in one hand, I’m watching a movie, or reading a book, or playing with my phone, enjoying my own moment of bliss.
This is when I start thinking,
what should I do with this glass that I keep holding in my left hand?
Once I rest my body snugly into the wide back of of the FK SOFA, my hands can hardly move to the coffee table at my feet.
Unwittingly, while realizing that the wide width of the sofa arms is both good and a little unstable, I set my glass on the arm.
Although the arms are wide, they begin to curve at the corners, so the flat part of the arm isn’t actually as wide as it looks.
I have to be careful not to accidentally put my glass on the unstable, curving part of the arm.

But hold on a second.

Wouldn’t it be nice if there was a secure place to put the glass on?
Like a tray that you could attach to the arm of the FK SOFA?
Now that I think about it, TRUCK’s owner Tok tried ten years ago to make something like it, creating and leaving behind a mountain of unsuccessful prototypes.
I thought that maybe I should just give up on the idea.

But I changed my mind. If there isn’t a tray like that now, then I should make one.

I attached wood legs to the tray into the shape of the katakana character “ko” so that the tray could slip on and off of the arm easily and still be secure when attached.
Believing it was good enough, I went to try it on the FK SOFA immediately…..

But it wasn’t good at all. There was a gap that formed at the right angles in between the curved parts of the sofa arm and the ko-shaped legs of the tray, so the tray wasn’t secure.

I tried again with other prototypes.

If the legs of the tray were too tightly fixed to the sofa arm, when removed, there would be noticeable marks left on the corduroy fabric. If the legs were too loose or the contact surface not enough, the tray would be unstable.
I tweaked the strength of the legs; I changed the material, the shape, the size; I tested the prototypes on the sofa over and over.

Finally, I settled on curved wood for the legs.
Because I made the wood curve to align with and match the curve of the sofa arm itself, I was able to create the precise amount of fixation and stability.
After the tray has been removed, even if there is a slight mark left on the corduroy from the legs, gently rubbing the area removes it, so the next day, there isn’t anything to worry about.

The tray increases the area of the sofa arm and is more secure for placing things than without, and its melamine resin coating means that I don’t have to worry about water stains, either.

I have yet another reason not to get up from the FK SOFA.