January 1997 in Tamatsukuri, Osaka. In an area where there was nothing, not even a single store, we, Tokuhiko Kise and Hiromi Karatsu, along with our Labrador pup Buddy, decided to open our furniture store, TRUCK. 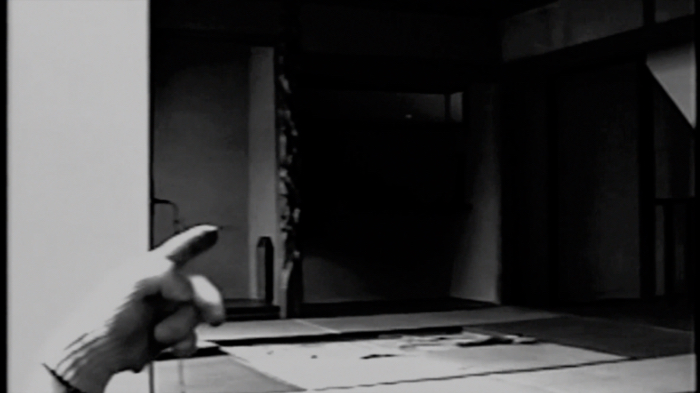 May 1996
We renovated the rooms of an old run-down building by ourselves to make our home, workshop, and store. We were not familiar with the word "renovation" at the time, but we gave it our best shot, feeling our way along as we gradually created our space. The two of us spent an entire month doing nothing but work on the interior. We put all of our heart and effort into every aspect – from tearing things down to painting, to putting down the flooring and even installing the plumbing. By the end, we were sleepless, covered in dust, worn-out, and poor – but it was all worth it. To us, nothing was more fun or satisfying than creating our own space. 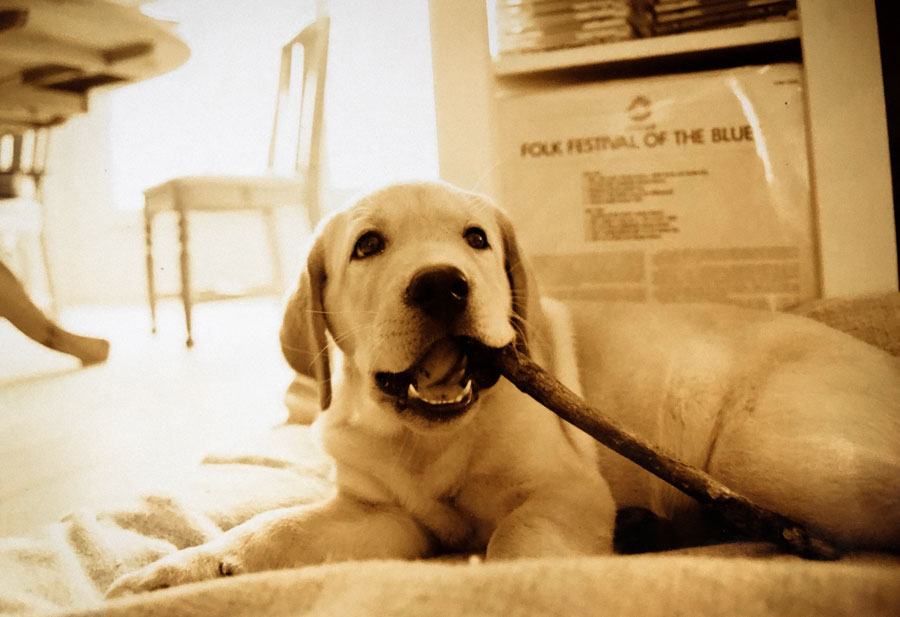 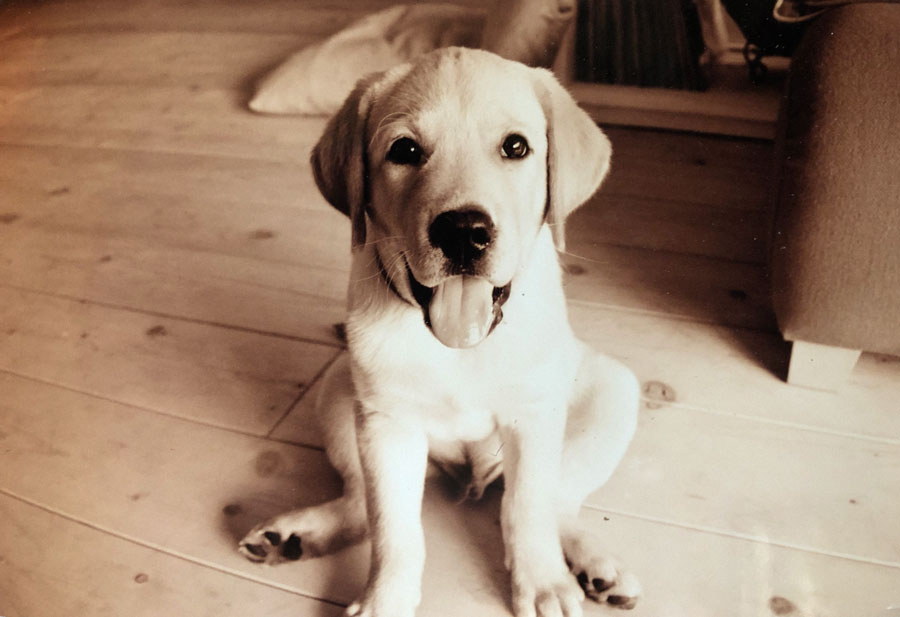 September 1996
This is our Labrador and the store's poster-boy, Buddy. He was always by our side, watching over TRUCK.
Before we started TRUCK, the both of us were very into blues music, so much that we seriously considered opening a blues bar. On the jacket of a record from our collection called "STONE CRAZY", the artist, Buddy Guy, is captured in a moment of fervent jamming on his guitar. His eyebrows, lifted in a state of dream-like passion, had the shape of the Japanese character ハ (hachi), which looked much like the eyebrows of our good-natured Labrador. Thus, we named our little pup "Buddy." When Buddy's son was born, he took on the name of Buddy Guy's partner, the harmonica player Junior Wells, and was called "Junior," which coincidentally also means "son." 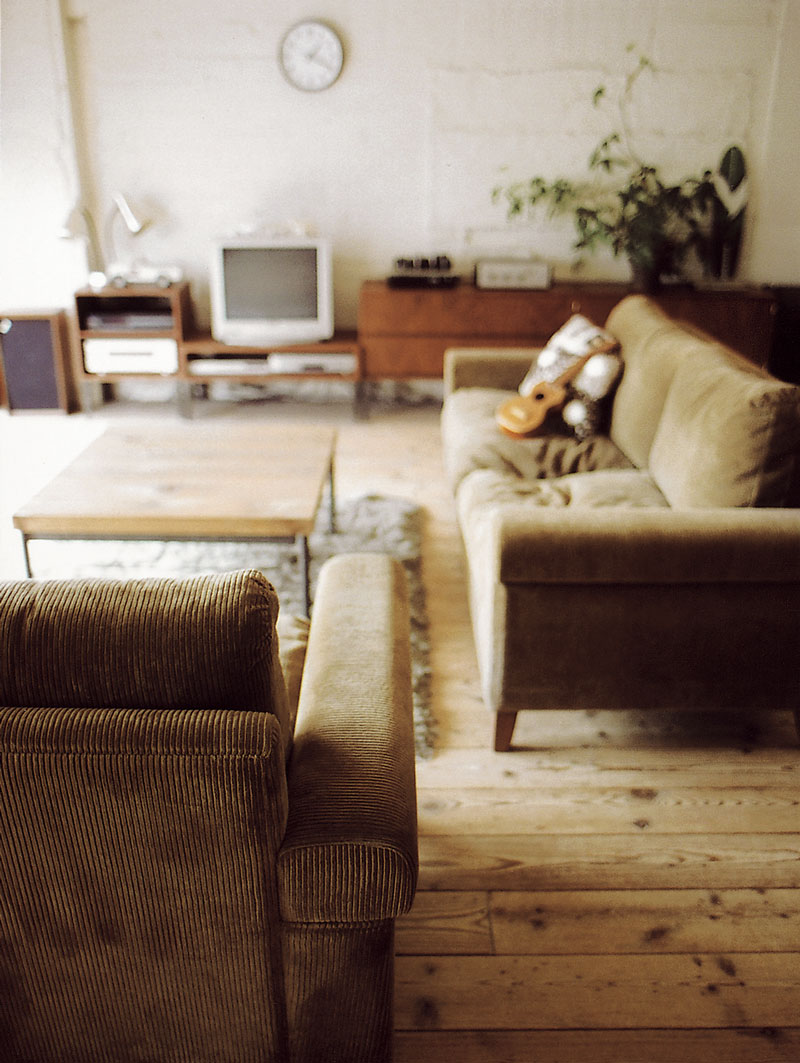 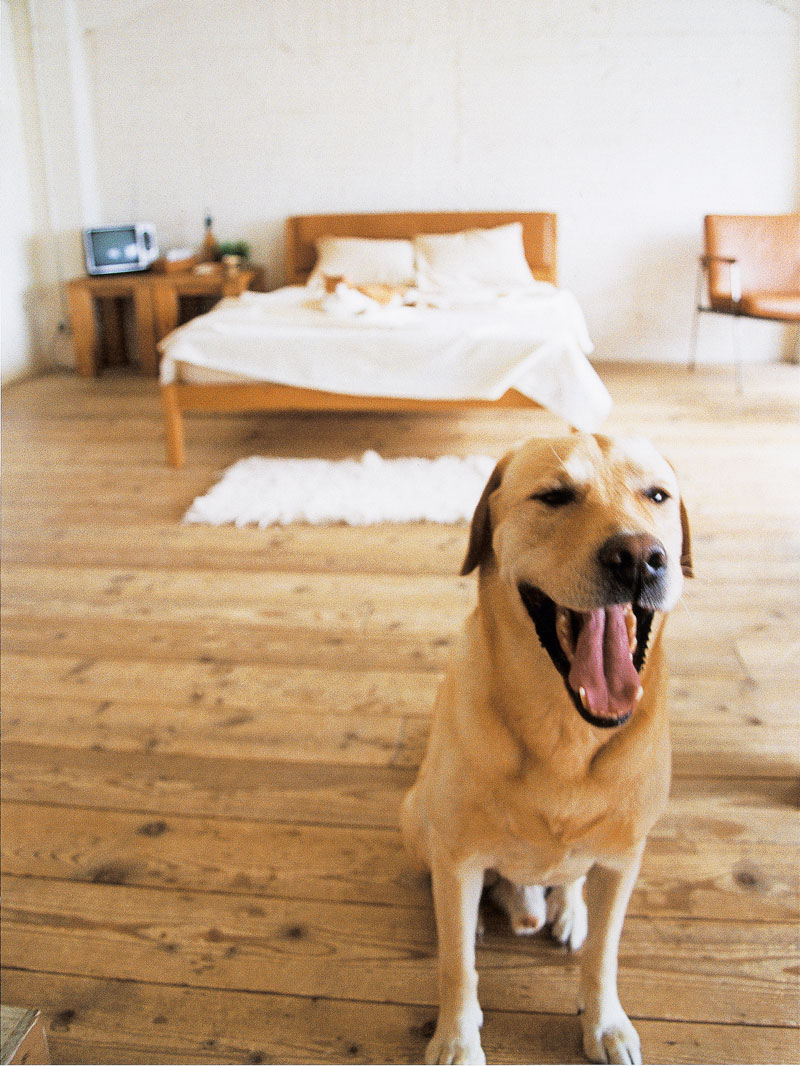 July 1997
Before we made the shop on the first floor, we set up our home and living space on the second floor. We stripped the interior walls and just threw a layer of white paint over the bare concrete. It was in this space that we took many of our photos and where three of our catalogs were born. The way that we made our catalogs was also a bit unconventional in that we didn't hire set stylists or cameramen – we chose to do it all ourselves. Although we were amateurs, taking pictures how we liked them somehow felt more original and fresh. 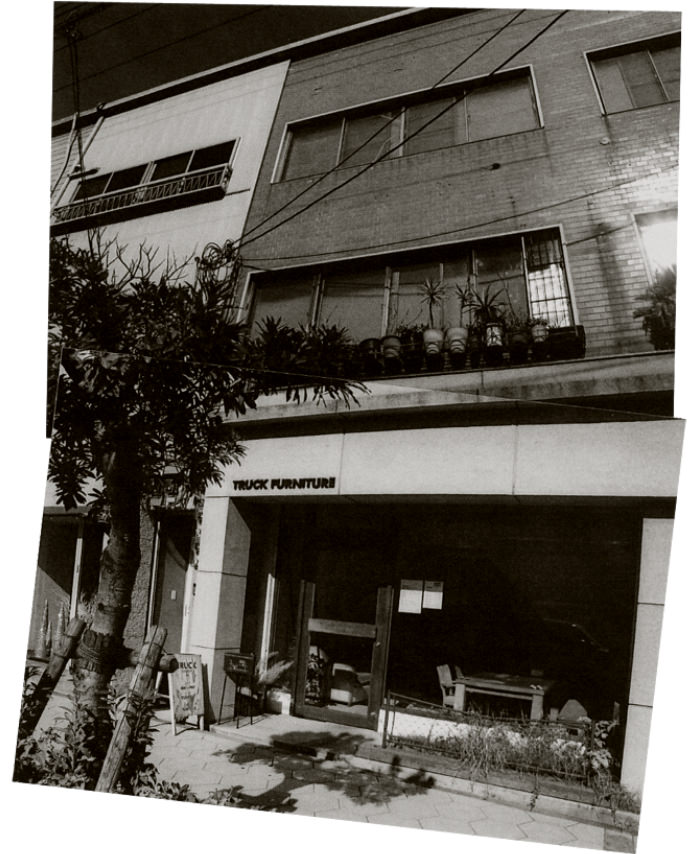 January 1997
Opening TRUCK
The first floor of the building was about 126 square meters. We used the 66-square- meter space facing the street for the store where we displayed the furniture and put the workshop in the remaining space in the back, which was divided by a single, creaky sliding door. The sounds of the machines in the workshop would carry from the back and fill the air of the store.

Back then, the internet wasn't as popular as it is today, so we didn't have a website, nor did we make any particular effort to promote ourselves. We simply opened the store one day. For the longest time, we didn't even have a cash register – we just stored the money in Tupperware. (Actually, we used Tupperware to keep our money in all the way up to 2004!) 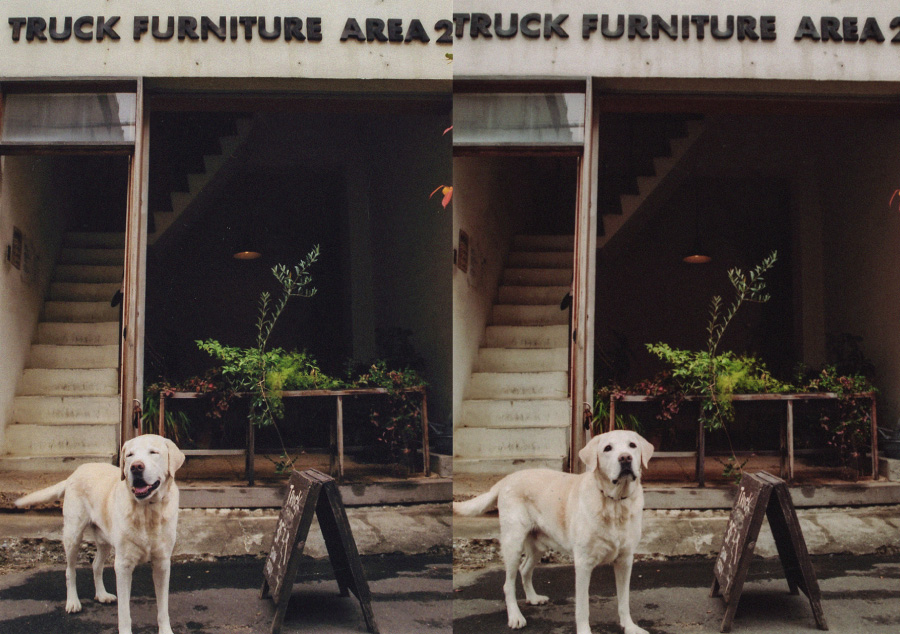 December 1999
Opening AREA2
The workshop space we had been using had become too tight and cramped, so we rented out another space, the three-story building directly behind TRUCK. In the same way as we had done to the first building, we fixed it up ourselves, but this time we were doing the work on the new space while simultaneously operating the store. Little by little, in the night after we closed the store or on our days off, we would work on the renovations. Because we couldn't make any other time, it took six whole months before it was ready to open. 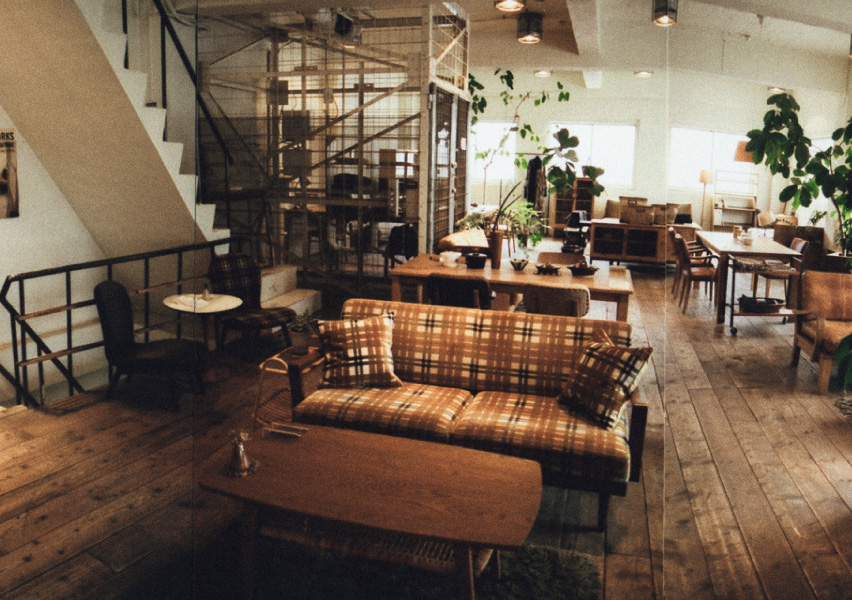 The first floor of AREA2 was the workshop, the second floor the finishing room and storage space, and the third floor our store. Buddy would often be found sleeping comfortably on one of the beds we had out on display. Sometimes he would join customers on the sofa and relax, and sometimes the customers would play with him. He made the atmosphere of the space feel more warm and cozy. 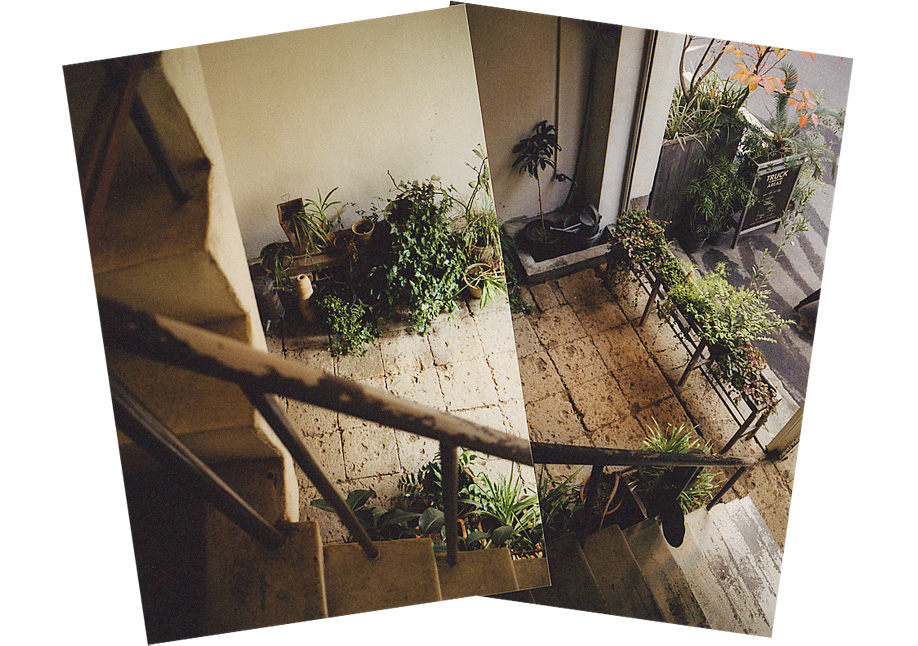 The entrance of Area 2, with its bright gathering of plants at the front, was called, "The Rest Stop." It was next to a flight of narrow and steep stairs that you would think led up to the store, but once you got to the top, you would find that instead of a store, there was a workshop. It wasn't until you looked down the side of the workshop, saw yet another staircase, and wheezed your way up it that you would eventually arrive to the store on the third floor.

Why did we put the store in such an inconvenient place for our customers, you ask? It was because the main goal was to increase our workshop and storage space, not create a bigger retail space. Ordinarily, we would have put the store on the first floor facing the street, but we chose to prioritize having a bigger workshop with machines.

We didn't intend for it to happen, but our store ended up being known as "the furniture shop where you can see the craftsmen's faces." 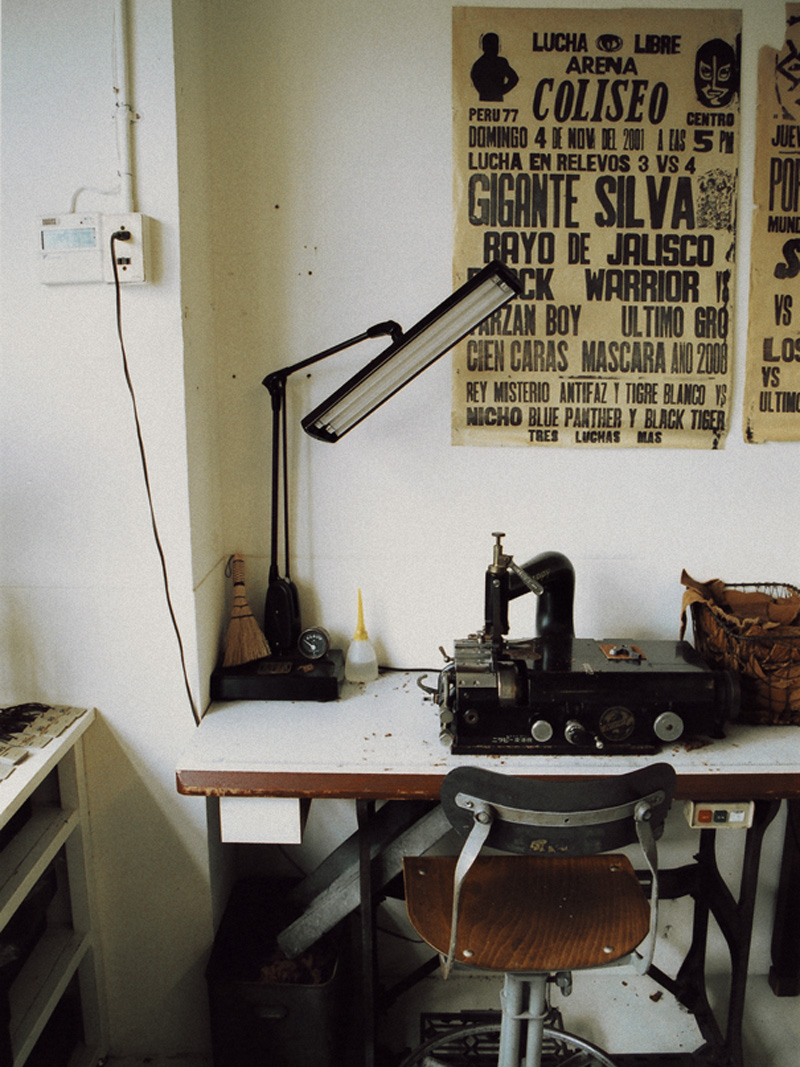 July 2003
Atelier Shirokumasha
When we made sofas and chairs with TRUCK's "Furrowed Leather," we were left with a lot of scrap pieces that we thought would be a waste to just throw away. We decided to reuse and make little accessories out of them under the name "Atelier Shirokumasha."

One by one, we make all kinds of small items by hand, like belt pouches, cellphone cases, and wallets. Because we use scrap leather that is often scuffed or has rough or floppy edges, each piece has its own unique countenance, or "face," that over time and with use not only changes color, but also acquires a certain character and charm.

June 2007
At last, the construction on our new space in Asahiku had begun. After a long and arduous search, we had finally found the place where we could spend our days surrounded by trees. However, the space was taken up completely by the old buildings of a taxi company and unfortunately, there was no way to reuse them, nor was there a single tree around. We decided to tear it all down so that we could start fresh from an empty lot. Right before our eyes, there was 1,120 square meters of land, and it was all ours. 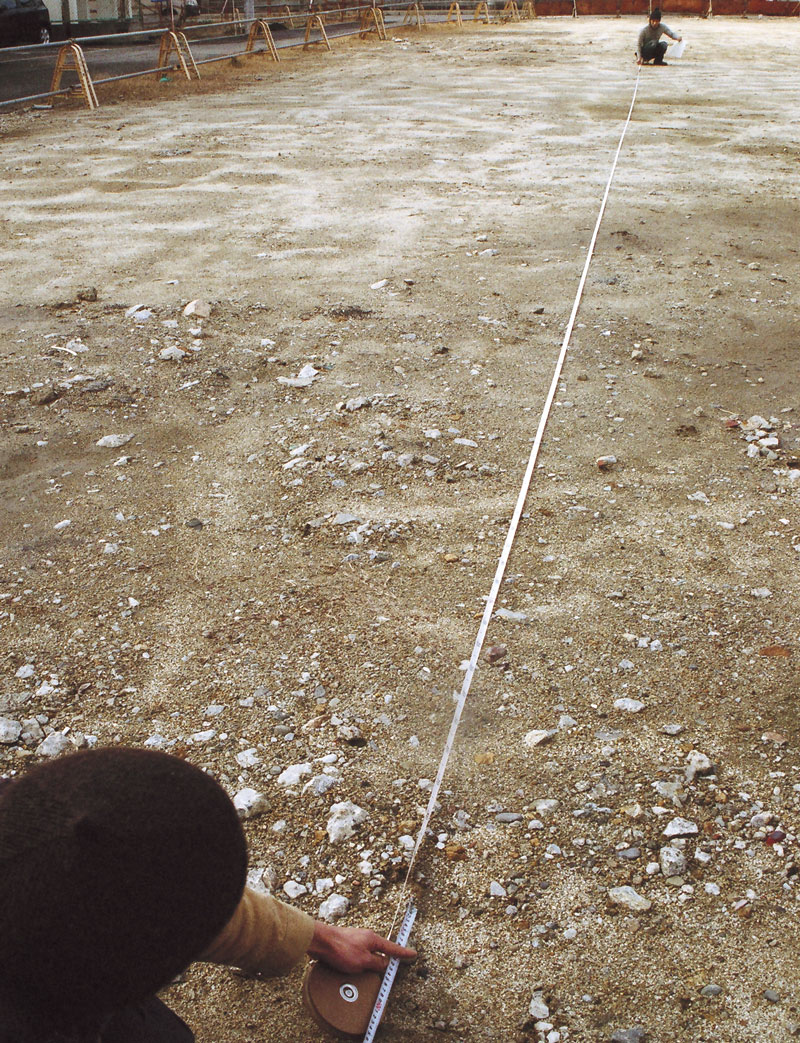 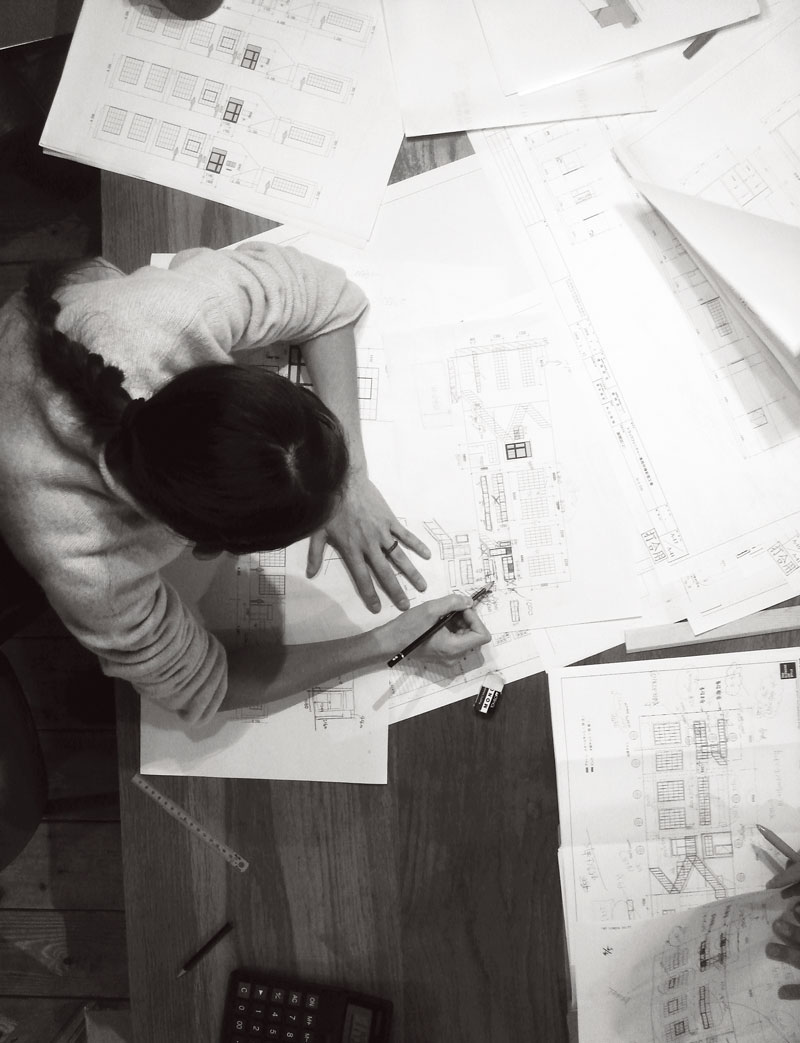 Far from being architects, we two novices made the buildings for our store, workshop, storage space, cafe, Atelier Shirokumasha, and our home, then planted towering trees of over ten meters around them. We designed everything from the steel-frame windows to the brick walls. Our plan took place on a grand scale, as it took almost five years of searching before we found the land that we wanted, a year to make the building plans, and another year and a half of construction before we could open it. 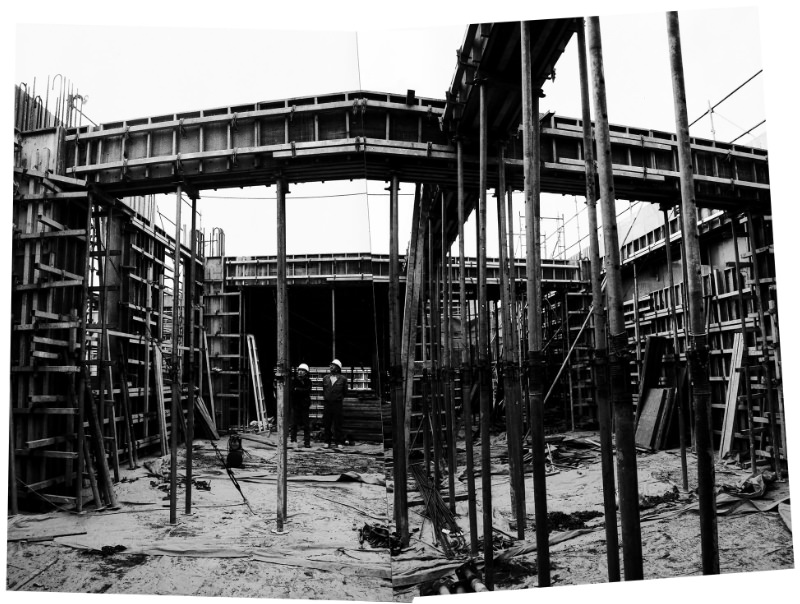 We were involved with each and every step of the building construction, from putting the steel framework together for the molds to pouring the concrete in. 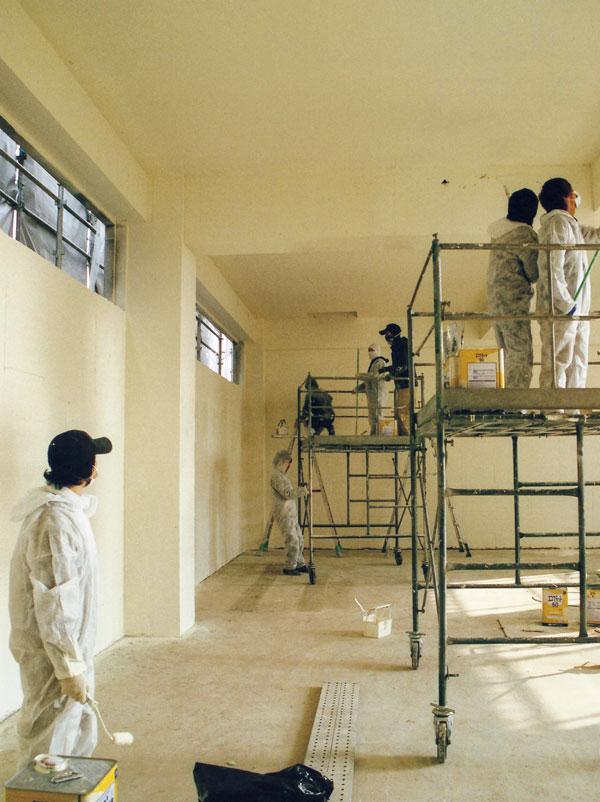 Despite the cold, frigid air of the year-end, all of the staff came together to paint the walls with us. 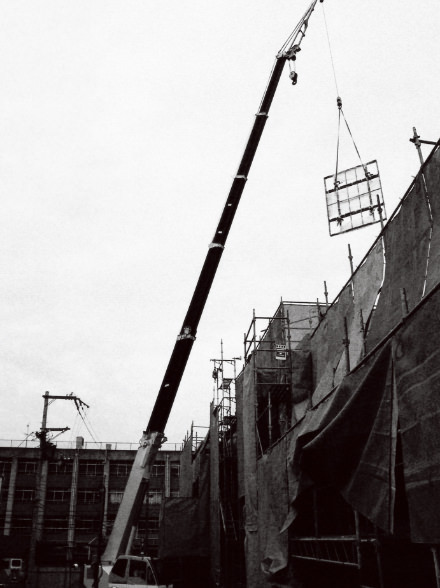 Finally, we could put in the big windows that we had designed.
The big concrete boxes began to look like actual buildings. 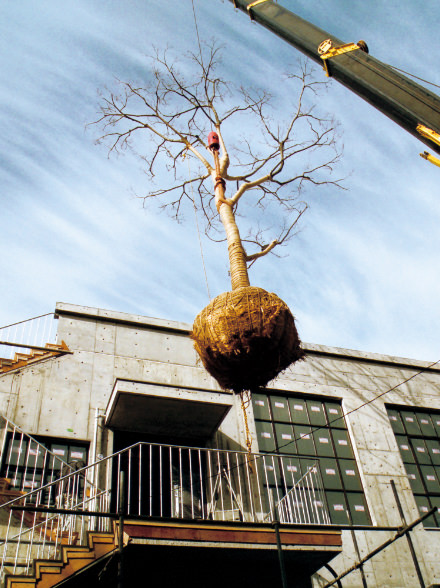 January 2009
This was the most important part of our grand plan: planting big trees. There wasn't a single tree in the space when we bought it, so we had to plant each one ourselves. Including the trees that surpassed ten meters in height, we hand-selected over thirty trees and shrubs. The tallest of them is our Japanese Zelkova tree, which then stood at fourteen meters and whose roots extended an extra two, so when we first transported it on its side to TRUCK, it was a total of sixteen meters long and weighed a whopping five tons. The sight of it being hoisted up in the air by a huge crane was truly something else. We also rescued some trees that were set to be cut down from the area near our old space when it was being demolished and moved them to the new space. 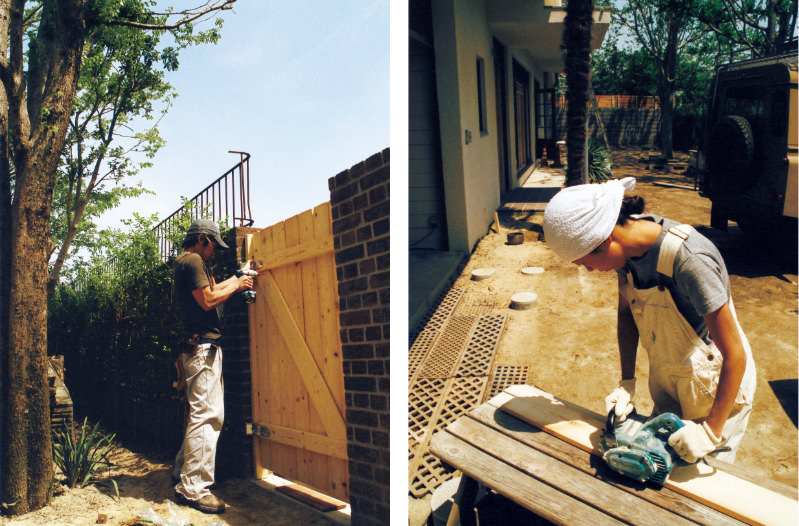 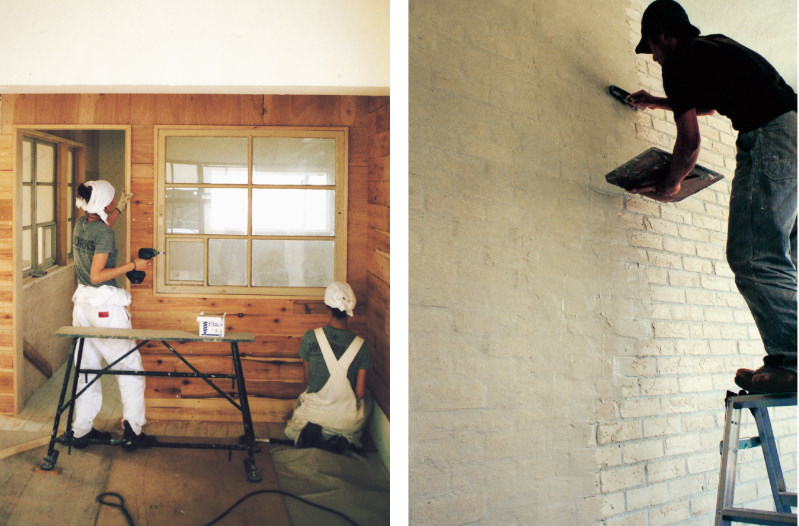 Painting, welding, laying down the flooring... we did anything and everything. 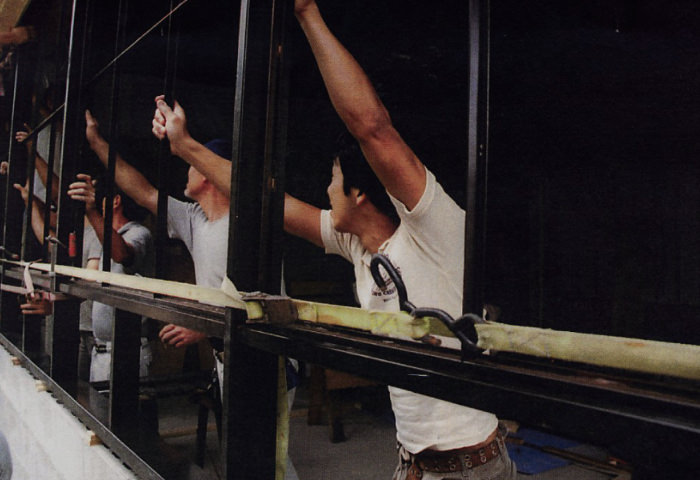 August 2009
It was something that we had wanted to have and thought about ever since we started TRUCK: a space where our customers could drink a cup of hot coffee and relax. We used the relocation of the store as our chance to create our cafe, Bird, which we also built by ourselves. Over the course of eight months, we worked on the building, doing things like painting the walls and putting down the flooring. When we finally installed the grand window frames, it felt like the entire world that we had created had come together at once. 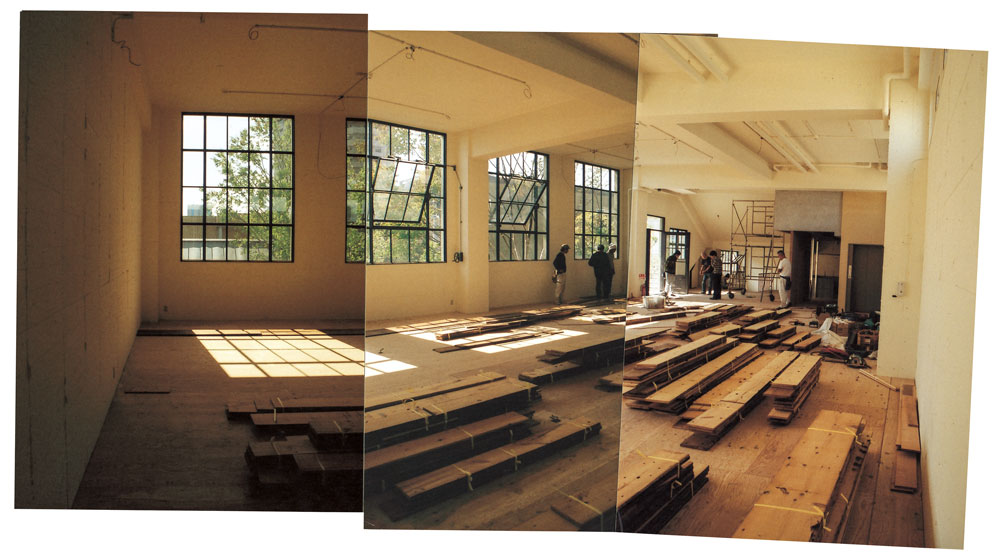 It took two and a half years from the time we purchased the land in Asahiku to open the new store and cafe. The work on the store interior had at long last reached its final stages. 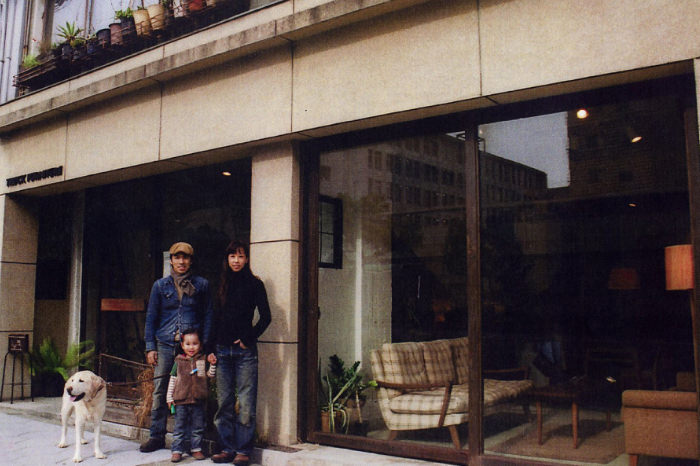 December 2009
It was here in 1997, at this store, that everything started. It's the place that we had worked hard to find and create from nothing. We were sad to leave it, but we did so that we could move forward.
This is the last family photo of us, our then three-year-old daughter, and Buddy, all together before the big move. 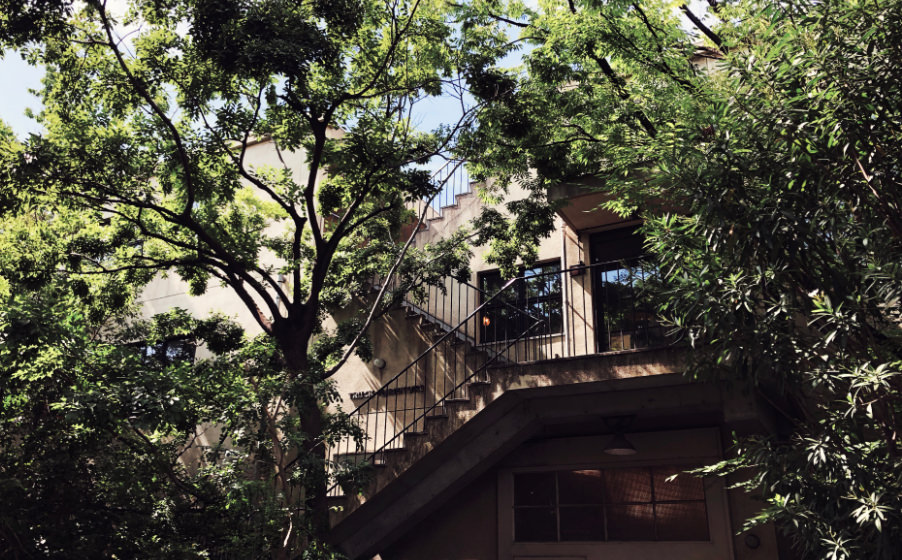 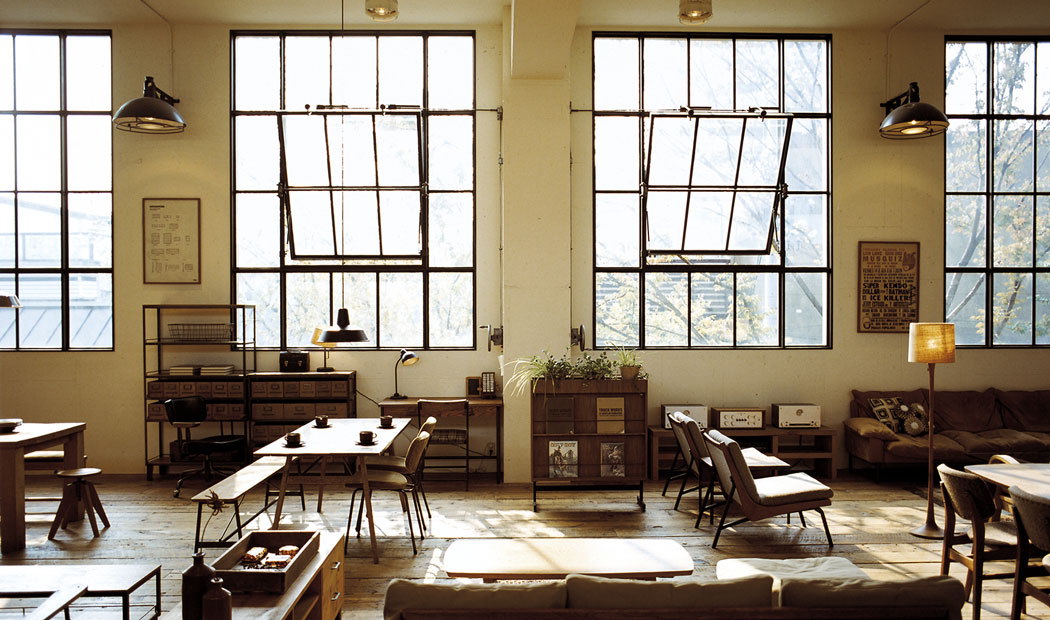 In December of 2009, surrounded by trees, in the place that we had built up from all of our thoughts and imaginings, TRUCK and Bird were opened anew. 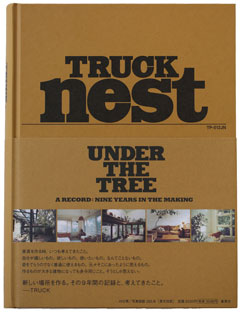 Making a home, making a store, making things.
Read the entire story of TRUCK in this one book.

Making a home,
making a store,
making things.
Read the entire story of
TRUCK in this one book. 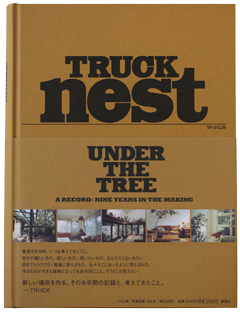