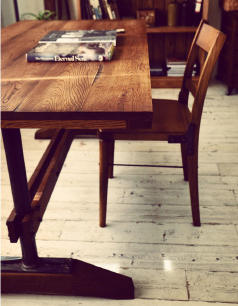 Something that has always interested me is furniture and tools made not by professionals, but by laymen or amateurs who simply made it because they needed it.

For instance, an old man at a bike shop has to fix a flat tire and needs a low stool to sit on. He takes a slab of wood he found somewhere and some rectangular plank of wood he found from somewhere else and nails them together to make a makeshift stool. He uses it for years and years, fixing it as needed here and there, and the oil that has accidentally spilled or found its way on the stool seeps into the wood, giving it its own unique look and personality.

The old man at the bike shop is not a carpenter. He needed a stool, so he made it.

Even when I go to the market and look at the carts on which the fruits and vegetables are lined up on display, I think, “Wow, how did they make that! I couldn’t do it myself!” I am taken by pieces like that, that were made without any knowledge of the fundamentals of how to make furniture. I couldn’t imitate it if I tried.

In my garage, there’s a work-use sandpaper roll holder that I made. I made it in the same way I imagined some grandpa with his belly hanging out and drinking a beer on a Saturday afternoon would put together out of whatever he found laying around. If it ended up looking too “pro,” it was a failure.

So, just as the old man would have, I used only wood I had on hand and a flat bar, and instead of any complex tenons or anything like that, I used nails and screws. The wood had a really uneven thickness. It was even harder than a regular one to make. But it came out just as I wanted. It goes with everything else in the garage.

The Johnson Table is made with the same image in mind.

When I put two metal legs on both ends of the table, I knew the table would shake. I tried to think, what would the old man do? He would probably add a piece of wood between the legs for support. Naturally, it worked. So I continued, doing what no professional furniture maker ever does by bolting two long planks along the middle to both sides of the legs.

On the underside of the tabletop, I added I added 50mm-wide pieces of wood around the edges for reinforcement. It’s there because even though I knew that without it the tabletop would bend if pressed upon, I wanted to make it look like I only realized it later.

But really, this table isn’t made by some old guy at a bike shop or a grandpa with a beer belly. It is built strong and sturdy, and is in no way carelessly made. I share those stories simply to explain the essence in which the table was made. You don’t have to worry.

It doesn’t have side-panels like a regular four-legged table, so even you with the long legs can cross your legs without hitting them.