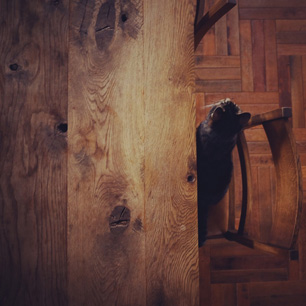 It was the winter of ’98 when I first saw the sheets of timber in the wide and empty lumber warehouse: It was the white oak I had air delivered from America. I had longed for wood like this, with its knots and cracks still intact. Just by looking at it and scratching it I could feel how heavy and strong it was, like a rock. Then I saw something I had never seen before: swells in the wood. It felt completely different from any other wood I had used before.

I started making furniture on my own at 23, then six years later I opened TRUCK in ’97. Under the first floor of the store I made furniture in the workshop, and on the second floor I lived with Hiromi, an illustrator, and our labrador Buddy. Not long after, in February of ’99, there was an exhibition in Osaka at Horie Gallery. We presented “Truck Tables 3×3, ideas on specimens on table.” I wanted to show that TRUCK’s worldview encompassed more than just furniture. We displayed things like pebbles and leaves we had picked up here and there; illustrations, pictures taken from my day-to-day life, and short movies we had shot with an 8mm camera. We put all of those items out on top of nine 500×500, 550mm high tables.

Up until that point, I was always thinking about how to make furniture from “beautiful” wood. Throughout the process of making something, if a knot or stain appeared, I would replace it with another piece. First I would take the wood from the “pretty” side and put it through the hand-feed planer, then adjust the thickness in the automatic planer so that the blemishes would come off. Keeping the knots in the wood was considered something outrageous, impossible even.

One day, while I was looking at a small knot that had appeared on the wood that slid through the automatic planer, I thought, “Knots are a part of the wood and from the same tree, so if you display them in a certain way, they can look good too, right?”

For the pieces I was going to use for the gallery exhibition, I was determined to use wood that had the knots and cracks intact. The focus was of course the items displayed on top, but I wanted the thing on the bottom to have a real, undeniable presence about it. Without question I thought that I should use old wood. That being said, I never use old wood for TRUCK furniture. I make new furniture with new wood so that it can change color and appearance in accordance with the people who are using it.

But once the image of the knotted wood came to mind, I just had to find it. Yet even the wood shop I always went to didn’t have it. I explained what I wanted and looked everywhere, but it was nowhere to be found.

Nowadays you often see the wood with knots and cracks in it, but at that time not a single warehouse had it in stock. Originally, Japanese liked beautiful, smooth wood with no knots and often asked the mills for wood without them, but for me I couldn’t get the image of the knotted wood out of my mind. “No matter what, I want wood that is strong and full of cracks and knots!”

I heard that maybe American White Oak would do the trick so I went out to get it. The day of the exhibition drew nearer. I didn’t have time to wait for it to come slowly sailing on a ship to Japan. If it was flown in, it would make it in time… … at the shipping cost of 500,000 yen!! The wood itself only cost 100,000. My rent at the time was 326,000. The cost was staggering.

But I had no choice. I bought it, had it delivered to the warehouse, then drove the wood home and set out to work. Unlike anything I had ever done in the past, I started cutting the wood from the side with the knots instead of from the “pretty” side. It felt plain wrong.

On what parts of the tabletop should I let the knots show? Where should I leave the cracks? It was a new feeling, like I was an artist drawing a picture. I made the knots that I had once rejected visible in all their glory.

There were comments about it in the notebook left at the gallery. “The tables weren’t a main part of the exhibition but they had a presence that was really impressive.” That made me happy – there were people who understood.

After the exhibition ended, I decided to make a big table with the oak. With dimensions of 2000×900 cm and a tabletop thickness of 50-some centimeters, it was sturdy and strong. Although I intended the top to be flat, there were big dents here and there and cracks that stemmed from the holes in the knots. The boards on the tabletop also had slight gaps in height, but I left them that way. I did whatever I wanted to the wood. When I finished, I was completely satisfied with it. I was so happy that I placed it right in the best spot in the shop. I was shocked again at its weight, which was far more than I had imagined.

Really, I didn’t think that it would sell. For instance, if you run a dust-cloth across the top, it gets caught in the wood. Even clothes get caught in the cracks and holes!

But over time, people who liked that kind of wood started to come. At that time, I figured that that type of wood was special and peculiar, so I had customers who bought the table to sign a sort of consent agreement that read, “I understand that the wood of this particular item has unique characteristics including knots and cracks and may be uneven or rough.” Even now that that particular material has become quintessential of TRUCK style, I still have customers sign it.

Since then, while keeping the overall look along with its natural knots and cracks the same, I made some improvements so that the wood is gentle on hands, doing tests with dust cloths to make sure that they don’t get caught in the wood. (The Oak Table in the TRUCK store is the very first one, so you can still see the original version today.)

In the 15 years that I’ve had a special 2500mm long Oak Table in my house, the dents and stains that have seeped into the wood have given it color and personality. It’s made up of a mix of sukiyaki sauce on top of okonomiyaki sauce and takoyaki grease spilled and splashed all over. I laugh as I wipe and spread them across the table saying, “This is also an oil finish!” I don’t bother keeping it perfect and clean. Instead, I use the table more like a tool for my everyday life.