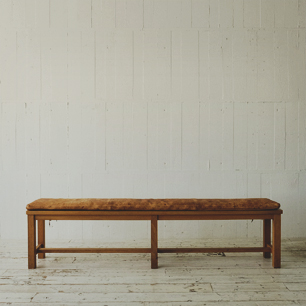 I think it was around the year 2001.
Kentaro had just moved to his new house and ordered an OAK TABLE for it.
He also requested that I make him a bench that would go along with it.

Nowadays when you look in furniture catalogs, it is typical to see the combination of two chairs on one side of a dining table and a bench on the other, but back then, you couldn’t find such a thing.

“It’s ‘cause I like benches,” Kentaro said, using his Osaka dialect when he spoke to us. “So make me one.”
Once I agreed to make it, we talked about what kind of bench it was that he wanted.
He said that he wanted one that he could sleep on; one that he could hold his feet down with a belt and even do some sit-ups on. And so, I added a seat cushion.

After I made it, we sat on the bench countless times and ate dinner, talking about nothing much in particular, and sometimes talking about something serious, late into the night. That’s how I learned what was so good about the bench and its inherent sense of freedom. However you go to sit down, whichever way you face, you can easily take a seat. You can even sit with your legs hanging over both sides just fine. The bench offered a kind of fun that was different from that of a chair.

At that time, we were also really into surfing. Kentaro and I admired a surfer named Joel Tudor, who could ride waves with such inexplicable ease. He was driven and had an effortless, limber technique.
Kentaro and I bought Joel’s surfboards and wrapped our bodies in Amsterdam Wetsuits. We watched his videos every day and imagined in our heads ourselves surfing like that. All that was left to do was to surf as smoothly and easily as Joel did.

On the shore, we kept moving our mouths, talking about all sorts of things from how the color of the surfboard was to how its shape was, but once we entered the water, we would become silent, but not just because there were many locals and more experienced surfers about. For us, the waves were always too big or too small, or too choppy or only dumpers, so we ended up spending our days never getting anywhere close to our goal of becoming like Joel.

That’s why we started putting forward steady efforts to improve our surfing skills on land. I wanted to get better at paddling so I went to the pool every day practicing my crawl, whereas Kentaro would lay on his belly on the bench and pull and raise rubber tubes that had been fastened to the table legs. When Kentaro decided to do something, he would put everything he had into it.

Every time I asked him about it the number of reps he did, the number would keep increasing. At first it was 50 times, then it was 100, then 200, and that would be in both the morning and at night…
As a result, Kentaro’s body gradually “developed”, getting bigger and stronger. No matter how you looked at it, his body had become almost the polar opposite of Joel’s. I often teased him, “You got all those big muscles, but are they really even useful when you paddle?”

And as another result, the leather of the bench also “developed”, its color becoming richer and more peculiar than before.

Afterwards, Masayan (Yamazaki Masayoshi) ordered from me the same table and bench. In the picture of Masayan’s bench that we published in “MAKING TRUCK” in 2006, you can clearly see a belt tightened around one end.

This is a bench that could tone your muscles or even (perhaps?) make you a surfer like Joel. It really is fantastic.