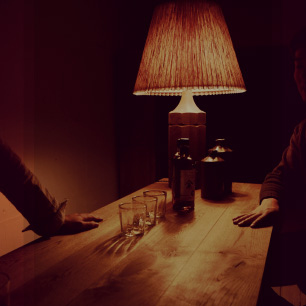 We started the photography of the counter in an empty room that was being used as a studio.
The morning light came in through the window. When we put a stool next to it and a cup on the top, the counter looked like a coffee-stand you’d see in San Francisco. It was like you could just take a seat and read the newspaper while enjoying a cup of coffee. The ambience of the morning alone easily transformed the room.
We started photography again later, when it got a bit darker outside.
We dimmed the lights inside to match.
The counter that was once a coffee-stand suddenly turned into a bar when the cup was replaced with two glasses and a bottle of whiskey. A TRUCK employee took over bartending duties and another sat on the stool, playing a customer. Even though you can’t tell from the pictures, I played some music. Because it had just turned into autumn, I played the song “Autumn Leaves” from the album “Something Else”. I first heard the song when I was 19 where it was playing at the very first jazz cafe I had ever been to.
The bartender asked, “Is it raining outside?” in a low voice. I almost felt like opening a real bar right then and there.

Bartending duties were passed off to another employee. It was funny how the atmosphere of the bar changed with each new person that stood behind the counter.

The new bartender changed the music, this time to “Three Little Birds” by Bob Marley & The Wailers. And just like that, the atmosphere of the bar went from sophisticated to casual.

’Cause every little thing, is gonna be alright!

The employees continued to switch off playing bartender. With every change of bartender, there was also a change of music.

Each person gave the room a different air and feeling – we had a bar that was mature, a bar that smelled of the sea, a bar that was a little tired, and at night, a bar with a lady bartender. Finally, my little eight-year-old daughter even took a turn behind the bar.

Forgetting about the photography going on and just enjoying the atmosphere, we really had a good time. I couldn’t believe we had so much fun with just a counter!

This was designed by longtime TRUCK employee Tokunaga, who wanted it for his own room. The “TG” of “TG COUNTER” stands for his name.
Having a conversation over a counter has a different type of ease and freedom than when had over a table.
And with the substantial amount of storage space behind it, it wouldn’t be too much to say that having the TG Counter is like killing three birds with one stone.